Save Weston A&E Demonstrations on

The Save Weston A&E campaign group will be holding two demonstrations: the first on 30th September at 1 pm at the Town Hall in Weston, when North Somerset Council’s Health Overview and Scrutiny Panel meets to discuss the plan to keep A&E closed overnight permanently and considers whether to refer it to the Secretary of State for Health as a substantial variation to local health services. The second on 1st October at 1 pm in the Italian Gardens when the CCG meet to make the final decision on keeping our A&E department closed overnight permanently – the business case for this decision will be published on 24th September on the CCG website.

“Let’s be clear. NHS  bureaucrats – the CCG – want to downgrade Weston General Hospital. They want to turn it into a glorified nursing home and treatment centre which can be sold off to the highest bidder. This process started two years ago with the “temporary” closure of Weston’s A&E department at night. Next they will close the A&E by day, replacing it with a GP-led Urgent Care Centre. In the end the hospital will become a “Frailty Hub”, maybe with facilities for treatment of cancer and other conditions. Whatever, it will not be our local hospital. If local people have any accident or emergency beyond something that needs a bandage, they will have to go to Bristol or Taunton. This plan is unfolding while the population of North Somerset is expanding massively due to new house building. The CCG plan is blatantly not a good idea.”

“69% of people who responded to the Healthy Weston consultation said that they did not want A&E closed overnight permanently. We need the CCG to listen to local residents, so we need as many local people as possible to come to our demonstrations. North Somerset Council’s Health Overview and Scrutiny Panel have the power to refer the CCG’s proposals to the Secretary of State for Health for review. A big crowd of local people will help them to decide how strongly they will oppose the CCG’s plans. And when the CCG themselves meet to make the final decision, again a large crowd will help to concentrate their minds and make them realise that they cannot ignore the wishes of local people.”

The Save Weston A&E Campaign group submitted a detailed response to the Healthy Weston consultation. We examined six specific areas including staffing and vacancy rates at the hospital, patient numbers, travel issues and the possibility of expanding our hospital to meet the needs of the growing community.  In all these areas the group concluded that the CCG needed to answer serious questions about their statistics and their approach

The campaign concluded that the Healthy Weston Consultation plan is currently not fit for purpose.  Nowhere near enough hospital doctors, GPs and nurses are being recruited to ensure that the new model is ready to start in October 2019 and the proposed merger with University Hospitals Bristol Trust has now been put back until April 2020. This merger could solve some of the recruitment issues at Weston General Hospital, and as a result it would make sense to put the proposals around Weston General on hold until then.

“We believe there is a strong case for the expansion of Weston General Hospital, including retaining a 24/7 A&E. The population of North Somerset. Bristol, Taunton and surrounding area is growing, and unlike some of our other local hospitals Weston has available land into which it could expand. Retaining A&E in Weston could also ease the pressure on overstretched services at other local hospitals and the ambulance service.”

Get Out in the Street and Show You Care

Tens of millions of pounds have been wasted on a major failed hospital closure programme, according to an internal NHS document passed to the Guardian.

A confidential, draft document circulated to NHS North West London Collaboration of Clinical Commissioning Groups, which serves more than 2 million Londoners, admits the blueprint for one of the NHS’s largest planned reorganisations has failed.

“NHS commissioners and providers in north-west London have therefore decided to draw the SaHF [Shaping a Healthier Future] programme to a conclusion,” the document states.

The proposal was a flagship for reorganisation of the NHS in England when it was launched in 2012 and involved a reduction in the number of acute hospitals in eight London boroughs from nine to five. Julian Bell, the leader of Ealing council, described it as “a monstrous plan”.

It was part of NHS strategy at the time to replace some acute hospitals with care provided in the community.

The document states that £76m has been spent on management consultants for the failed scheme from 2010-11 until the end of 2018. It outlines how health officials can respond to difficult questions that may be asked about the failed scheme. It also discusses preparing people for new changes as part of the NHS’ long-term plan, which the document states will involve “difficult decisions and trade offs”.

SaHF argued that four acute hospitals in – Hammersmith, Central Middlesex, Charing Cross and Ealing – could be downgraded. The proposal involved the loss of more than 600 acute hospital beds. The document reports there has been a reduction of just seven hospital beds in the last six years.

The closure of Charing Cross was particularly controversial after plans were revealedto sell off 87% of the valuable central London site by the Guardian. But in March the health secretary, Matt Hancock, announcedthat plans to close A&E departments at Charing Cross and Ealing hospitals would no longer go ahead.

The document says: “Continued growth in demand for acute care, despite investment in primary and community services, a growing underlying budget deficit and shortfalls in our ability to recruit and retain enough staff with the right skills’ means that the plan, as originally envisaged, is no longer viable.”

It provides statistics about an increase of 227,288 in A&E attendances across north-west London since 2012 – a 4% rise per year, with a 2018-19 waiting list of 177,395 patients, which would require the provision of 95 extra beds for a year to clear the backlog. The document adds there has been a 40% increase in patients waiting for non-urgent surgery.

It reveals how officials plan to “spin” this failure by citing improvements such as 100 new midwives and 90 new children’s nurses.

In the document, under the heading “incorrect/sorry”, the question “Will anyone resign over this?” is posed and the answer provided is “no”. The response to the question “What have you learned from this and how will you change the way you make decisions in the future to ensure millions of pounds of taxpayers’ money isn’t wasted?” is “??”.

The notion that some acute hospitals can be closed because NHS care can instead be provided in the community has been refuted in various independent studies including a reportfrom the Nuffield Trust which dispels some of the myths around this “magic bullet”.

Merril Hammer, secretary of Hammersmith & Fulham Save Our Hospitals, said: “The leaked paper is extraordinary. This was the biggest reorganisation project the NHS has ever seen. We still don’t know how much it has cost in total. Since the initial plans were drawn up, campaigners asked for the evidence that ‘out of hospital’ provision could reduce the need for acute hospital beds. This was never produced.”

Cllr Ben Coleman, chair of Hammersmith and Fulham’s health and wellbeing board, said: “This leaked document confirms that SaHF was a grotesque waste of time and public money, which threatened life-saving health services.”

A spokeswoman for NHS North West London Collaboration of CCGs said some of the spending on management consultants predated April 2013, when the CCGs were set up, so could not be verified.

“North West London CCG’s spend on consultancies for the SaHF programme was £43m between April 2013 … and March 2019. There are now strict controls on management consultancy expenditure and we are not currently incurring consultancy costs for the development of our future plans, nor do we intend to.”

She highlighted achievements of SaHF including the transformation of paediatric and maternity services in north-west London and an increase in children being treated without admission to a hospital ward.

She added that while SaHF was no longer going forward and was being replaced with the NHS long-term plan, “we will however continue to learn and incorporate lessons from the previous programme into future work”.

Just in Case You think that only Weston General’s A&E is Suffering!

A&Es missed hitting their target of seeing 95% of patients in four hours by a record low in June, NHS England figures have shown.

The NHS traditionally recovers performance in the quieter summer months but this is no longer happening, health leaders and politicians have warned.

The target of 95% of patients seen within four hours has not been met since July 2015.

Miriam Deakin, director of policy and strategy at NHS Providers, said: “Historically, the summer months have been a time of year when the NHS could catch its breath and recover performance following high demand over the winter.”

But the figure released today show that this is “no longer the case,” she added.

Deakin said: “Today’s figures reflect the worst performance against the four hour A&E target for the month of June since records began, with major emergency departments reporting 78.8% patients seen within 4 hours, considerably below the target of 95%.”

Nick Ville, director of membership and policy at the NHS Confederation, said the NHS is “not even out of the foothills” when it comes to performance recovery.

He added: “The strain on front line services is clearly reaching critical proportions and this is being exacerbated by the ongoing pension tax disagreement, as senior clinicians say they cannot afford to work additional shifts.”

Jonathon Ashworth, the shadow health secretary, said the NHS is now in “year round crisis thanks to years of cutbacks and understaffing”.

“Local areas across the NHS are now reviewing the extra staffing and capital investment in facilities and diagnostics they will need for the next five years, ahead of national decisions on these later this year.”

Our Response to the CCG’s Healthy Weston Consultation

The link below is to our detailed response to the Consultation.  Our Opening Statement makes our position clear:

The Healthy Weston Consultation is currently not fit for purpose.  Nowhere near enough hospital doctors, GPs and nurses are being recruited to ensure that the new model is ready to start in October 2019 and the proposed merger with University Hospitals Bristol Trust has now been put back by six months.  Until this merger takes place we do not see how therecruitment issues will beresolved.  The process should, therefore, be put on hold and proper public consultation should only start when the project is capable of being realised.

This excellent video by filmmaker Marley Hamilton highlights the work of our great campaigner, Terry Hutt.

HELP US SAVE WESTON A&E

We are raising money to produce leaflets and to organise a march and rally to stop the plans to downgrade Weston Hospital’s A&E department.

Please contribute by pledging money – however little – at our Fundsurfer Page:

From a baseline it shows the downgrading of Weston General Hospital from an Emergency to an Elective hospital in three steps / consultations (options 9a, 12a & 27b). The baseline is the Present Commissioned Service (24/7 Type 1 ED).

The First (Present) Consultation is the one we are going through now. It shows how A&E, Emergency Surgery & Critical Care will all disappear from the hospital. We will be left with a Urgent Treatment Centre which is capable of dealing with sprains and strains, suspected broken limbs, minor head injuries, cuts & grazes, bites & stings, minor scolds & burns, ear & throat infections. eye problems, coughs & colds, feverish illness, abdominal pain, V&D and finally emergency contraception. 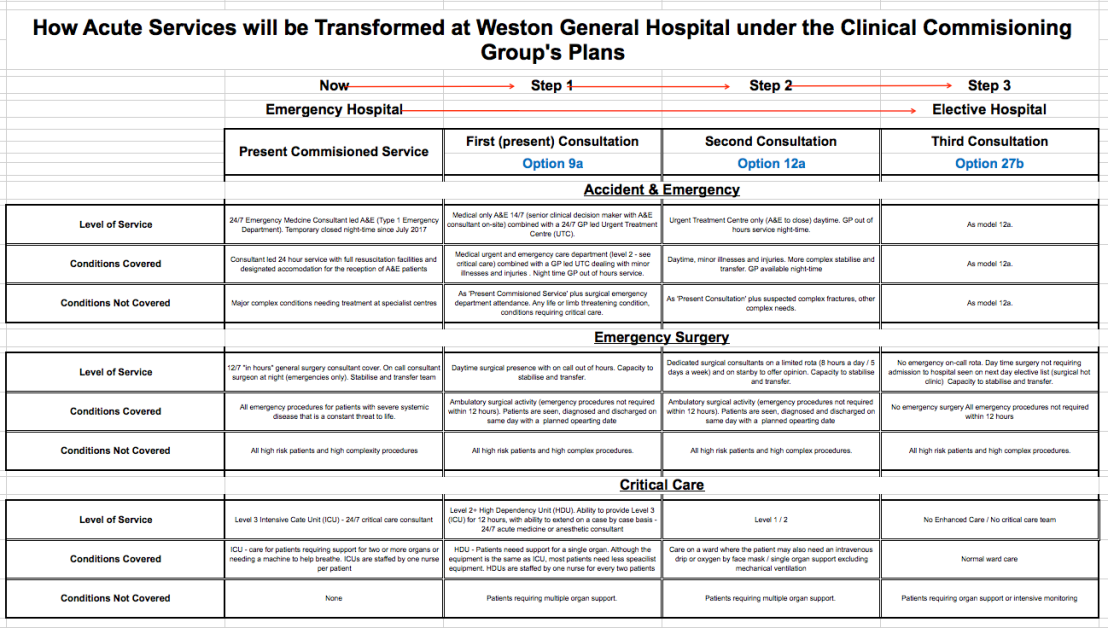 Join the campaign to keep our A&E

Respond to the Healthy Weston Consultation: 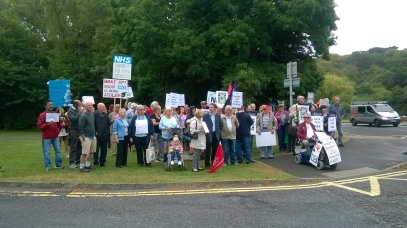 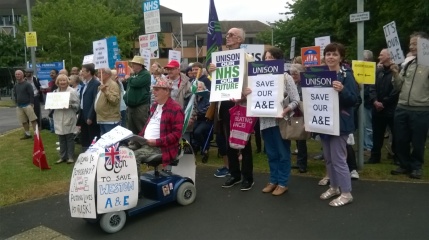 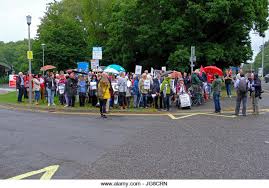 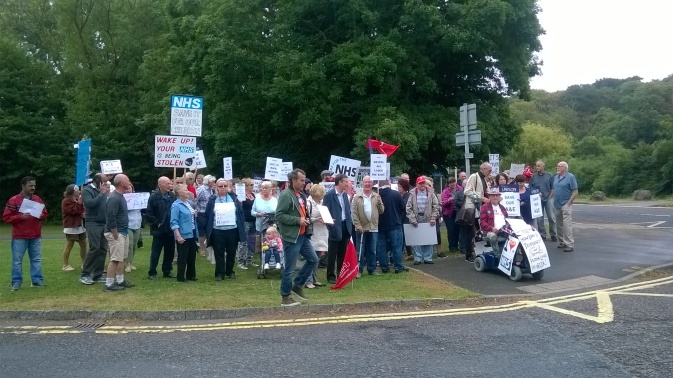 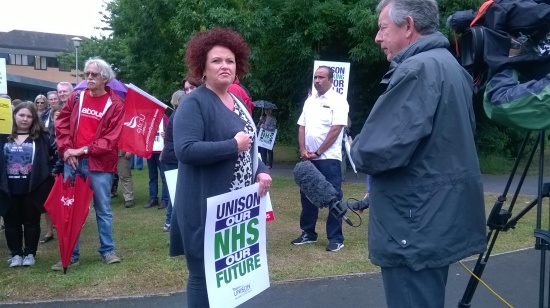